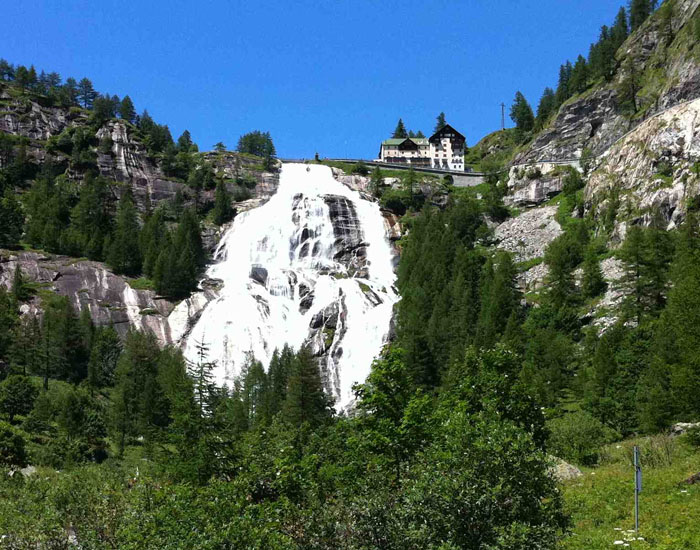 The Formazza Valley is the strip of land placed further north the whole Ossola. It is an environment that presents morphological characteristics typical of the high mountains, made of terraced plateaus, glacial cirques, interrupted by discontinuities which give rise to different jumps of water, the most famous of which is the “Frua” (Waterfall Toce, 143m.). Home to numerous natural and artificial lakes.

The Formazza Valley is geographically an extension of the Antigorio Valley. The impressive rocky spring of Casse (presumably due to a massive collapse at a later date to the glaciations) has always constituted the boundary between two very different cultures and ethnic groups: the imprint of romance and Latin in Antigorio and Formazza, the most ancient colony founded by herdsmen-farmers Alemanni coming from the high valley of the Rhone (Goms).

Along the Formazza valley we meet its scattered settlements “in German way”.

Foppiano Undrumstaldä Undrumstaldä (below the forest of Casse). It marks the border between the Antigorio and Formazza valley. It is a cluster of a few houses with the chapel dedicated to St. John the Baptist.

Antillone Puneigä, the village is near a dark and quiet lake that in recent times has undergone quite a few ups and downs. Antillone is reached via a pleasant walk through beech and larch woods. Characteristic the delicious sanctuary dedicated to the Visitation of Mary, the current destination of processions.

Fondovalle Stafuwald da stafel, closed or stockyard and wald woods. The small group was destroyed by a huge avalanche in 1863 and then rebuilt in stone, losing a bit of typical houses characteristics of the valley. On the hill south of the town are the ruins of a signal tower. On the left, in correspondence, the small Fracchie core (in der Fraku).

Chiesa an der máttu (the lawn) the church, accompanied by a bell tower and a typical cemetery is home to the Parish. Dedicated to S Bernardo, built around 1700, replacing an original building destroyed by an avalanche. In the old school building houses the Walserverein of Pomatt.

San Michele Túffáld (a name similar to the names of Bern and Valais that indicate large fir forests) destroyed by fire in 1765, was rebuilt.

Valdo Wald forest, was once the seat of the Municipality. There is the only plant of the valley: the chairlift Sagersboden. The started operation Valdo hydroelectric plant in 1923, the valuable building is designed by architect Portaluppi.

Ponte Zumstäg bears the name of the oldest bridge over the river, now it houses the municipal offices. From 1569 there is the Casa Forte, ancient dwelling of Ammano, the mayor and judge of the ancient community of Formazza. Over time it has been used in Parliament, Court, warehouse for goods, prison and guard post. Currently hosts an ethnographic museum.

Grovella Gurfälu, an old forest, the core leaning against a small promontory and gathered around the fountain. It seems to enjoy a particular microclimate thanks to the rocky hill that protects from the cold north wind.

Canza Frúduwald: früdu from frütt crevice in the rock, narrow step formed by streams: is a small village crossed by the Toce. It hosts the S. Rocco oratory with the tiny belfry. Was terrible the avalanche of 1951, that destroyed a dozen houses, killing six people

Sottofrua  Unnerfrüt It hosted the hydroelectric power plant in operation since 1924, until the construction of the one in Ponte (1932). From here it was paid the toll of the “highway”, the rolling stock built by the Company Hotels Formazza.

La Frua Uf-ä-Frütt the waterfall La Frua, being located along the path of Gries, surely it was known in ancient times, but the first description is of Saussure (1783). Dominating the waterfall there is the historic hotel built in 1863 by Zertanna family, destination of the most distinguished visitors and mountaineers of all time; next the lovely chapel dedicated to Our Lady of the Snows. The step of the water jump is of glacial origin and is divided into three bands, with a majestic waterfall of 143 meters.

Continuing up to Riale we are now above the forest edge, in the subalpine environment.

Riale inferiore Cherbäch unner dorf at the confluence. A Riale born Toce river that collects water from streams Roni, Gries and Hosand. The first houses are located at the entrance of the plateau, while the main settlement is higher Riale.

Riale superiore Cherbäch ober dorf is at the foot of the hill on which stands the church dedicated to Our Lady of the Snow, built in 1950 in memory of the oratory Morasco (dedicated to St. Anne, the grandmother of Jesus) that lies beneath the waters the artificial basin, with the entire village. In 1923 the Lake Kastel earthen dam broke and water flooded Riale, killing livestock and damaging for a long time the quality of the soil, to the detriment of the good pastures.

Morasco  Maraschg old permanent village, was abandoned as a permanent settlement around 1450, because of the changing climate. Later it was frequented as a summer pasture until the advent of hydroelectric colonization which completely submerged. In 1940 he was in fact completed Morasco dam, with its massive wall that delimits a concrete basin of 24 million cubic meters of water capacity. 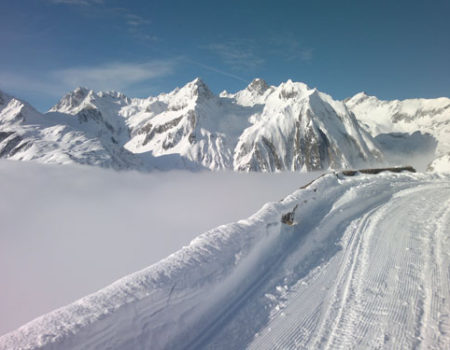 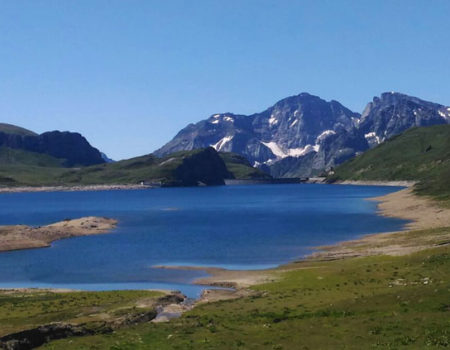